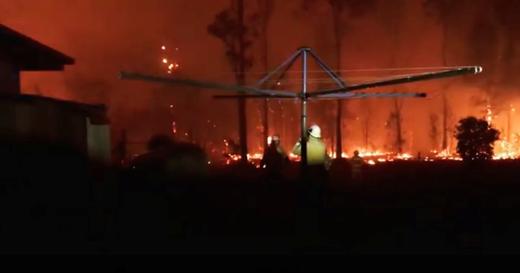 The number of dead has climbed to at least three from two whereas thousands have been displaced by a weekend of bushfires in Australia.

On Sunday, the fire emergency’s third day, it is said that over 100 blazes were still burning across New South Wales and Queensland.

Prime Minister Scott Morrison has said the military could be called upon to support the 1,300 firefighters working in the two states.

Hundreds of civilians have also volunteered to help in affected areas.

In Queensland, thousands of people spent the night in evacuation centres while officials assessed whether it was safe for them to return home.

Fire officials in NSW have confirmed that more than 150 homes have been destroyed.

Although cooler weather on Saturday night provided some reprieve, it is feared that high temperatures, low humidity and strong winds forecast from the middle of the week will fuel further fires that officials will be unable to contain.

On Saturday, NSW police confirmed that a third person had died after a body was found in a burnt-out home near Taree, a town about 300km north of Sydney.

Police said the home belonged to a woman aged 63, but that they wouldn’t be able to confirm their identity until a post-mortem had been carried out.

According to NSW Rural Fire Service Commissioner Shane Fitzsimmons, there would be little reprieve in fire conditions throughout the summer months of December, January and February.