With inputs from Rashtriya Samachar Samiti

Envisioned and developed by The Cliff Private Limited, adventure sports including bungee, swing and sky cycling will be conducted from the 525 metre bridge connecting Parbat District headquarters Kushma and Balewa of Baglung.

Though the construction of bridge along with a resort was completed in mid-April this year, the service could not begin owing to the prolonged lockdown, company chair Raju Karki shared.

A platform has been constructed in between the suspension bridge and just above Kaligandaki River for bungee jumping and swing. The height of the bridge from the rivulet is 228 metres or 748 feet.

As per current record, the world’s highest bungee is located in Macau with a height measuring 233 metres while the second biggest is in Verzasca Dam of Switzerland, which is 220 metres.

Following the completion of the current project of The Cliff Pvt Ltd, Nepal will register its name as the country with world’s second biggest bunjee jump leaving Switzerland behind.

Meanwhile, Chairperson Karki said, the swing would be the world’s highest. Rs 7,000 per person has been fixed for bunjee and swing. One needs to pay Rs 8,450 for bunjee or swing with two way vehicle service from Pokhara to Kushma.

Constructed at the cost of Rs 200 million, the resort and bridge would substantially contribute to boost tourism in Baglung district. 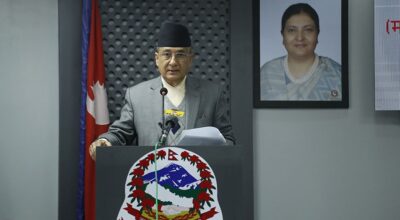 The government has decided to accept around Rs 12.7 billion ($100 million) development policy credit