2015 Earthquake: Revisiting our heritage sites on its fifth anniversary Nepal is no stranger to crisis – five years, around mid-day on this day, we watched concrete buildings shake. At the time, we were forced out of our homes; five years later, we are forced in. Then, only a few districts felt the pain; now, the entire globe shares the pain. Then, the most popular word was rubble; now it is pandemic.

For those who experienced the 2015 Earthquake – the aftermath was as unprecedented as the 2020 Health Emergency. If we remember, international support for Nepal too was overwhelming – some USD 3 billion dollars was pledged. An ‘independent body’, National Reconstruction Authority was formed, and five years time was sought to complete reconstructing Nepal. Five years have passed. Let’s visit progress of a few heritage sites:

(Note: An unofficial blockade by India along Nepal’s southern border in 2015, which lasted nine months, significantly hindered the pace of the reconstruction project) 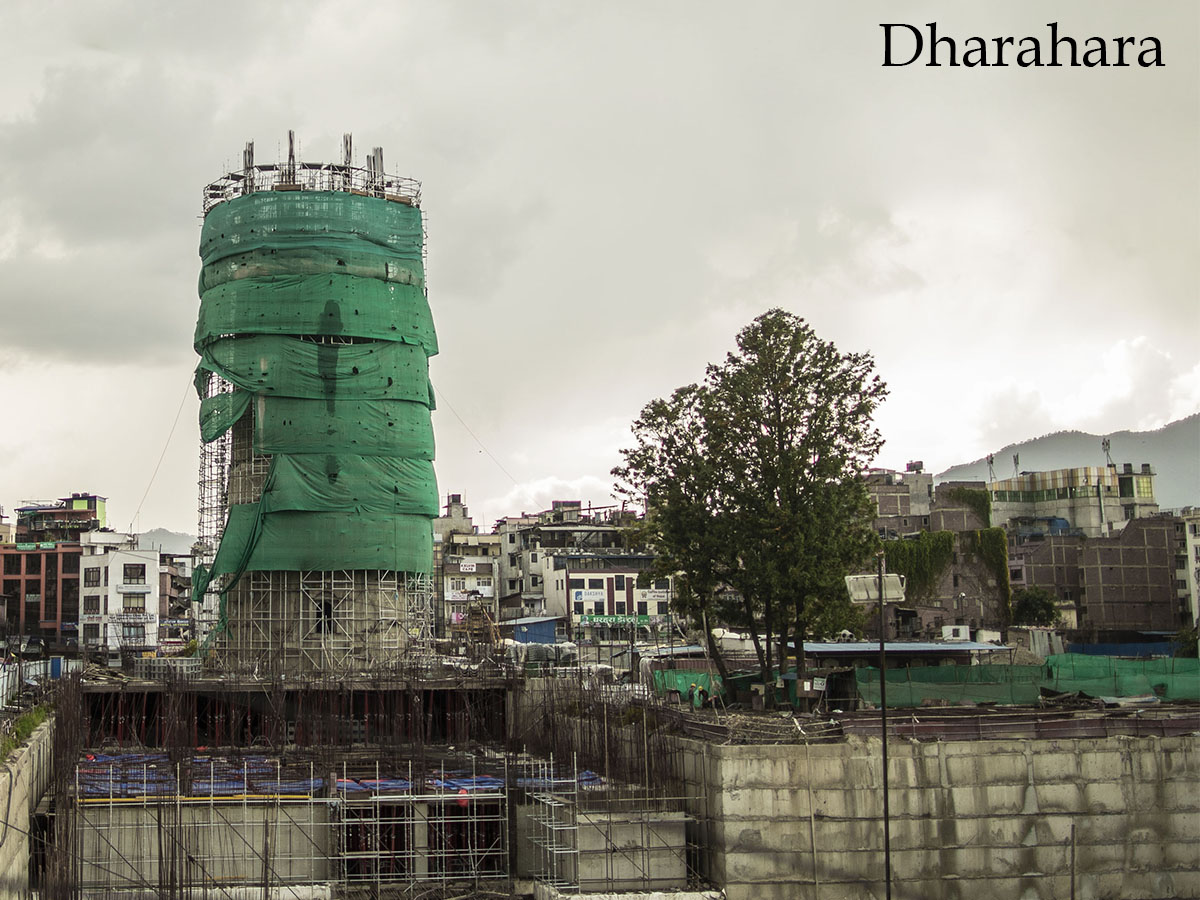 Dharahara, an iconic tower dotting the Kathmandu skyline (prior to April, 2015) was built in 1832. It was commissioned by then Prime Minister Bhimsen Thapa.

Although initially mired by several controversies mostly owing to style of reconstruction, progress of Rani Pokhari’s reconstruction is picking pace.

It is said that, Bal Gopaleshwor Temple in the middle of Rani Pokhari was originally built in the Shikhara style by Pratap Malla in 1670, as evident by an 1845 painting. However, in the aftermath of the 1934 Earthquake, then PM Juddha Shumsher J B Rana rebuilt the temple with a dome roof, a total disregard to the original style. This time though, the temple will be built in the traditional Shikhara style.

The pond’s ground and the embankment is also being built in the traditional manner – using clay and brick. While little to non public access to the premises of Singha Durbar is allowed, information about the progress is limited. Nevertheless, we have been informed restoration of the main building is underway, and as of 2019 end, 70% of retrofitting work was completed. Nineteen monuments within the Swayambhu Temple area had sustained damages owing to the 2015 Earthquake. As of April, 2020, reconstruction of all monuments was completed. As per Nepal Government, restoration works were carried out with the help of several donor agencies and certain internal resources were also mobilised.

Gaddhi Baithak, a Rana-era building in Basantapur Durbar Square sustained significant structural damage. The restoration project was funded by the US government under the Ambassadors Fund for Cultural Preservation.  Its repair and restoration was completed in June, 2018.

Reconstruction work of the historic nine-storey palace is underway, and is being funded by the Chinese government. Similarly, the Durbar High School was also recently completed. The funding of the Durbar High School was undertaken by China as well. The main stupa of Boudhanath, which had sustained damage, was one of the first structures to be restored – with private donations from Buddhist groups and help from local volunteers. While the main temple of Pashupatinath did not sustain any damage, reconstruction of other damaged temples within the complex is underway. In Patan, damages were of varying degrees – Harishankar Mandir and Char Narayan Mandir were completely destroyed, while Krishna Mandir, Bhimsen Mandir, Degu Taleju Mandir, amongst other structures sustained damage. Interestingly, the Bhaidegah Temple, which was rebuilt in a dome-shaped design after the 1934 Earthquake, was just starting to be rebuilt in its original form when the 2015 earthquake struck. Both temples, which were reduced to rubble in the 2015 Earthquake, have been reconstructed. Char Narayan Mandir, the oldest temple in Patan Durbar Square was completed in February, 2020.  The restoration project was funded by the US government under the Ambassadors Fund for Cultural Preservation.  Similarly, reconstruction of Hari Shanker Temple is also complete. Built in the 17th century, Krishna Temple in Patan Durbar Square’s architectural style is starkly different – stone masonry as opposed to the traditional brick and wood. The structure sustained significant damage during the 2015 Earthquake. The restoration project was funded by the US government under the Ambassadors Fund for Cultural Preservation in 2019.  Its restoration is complete.

Severely damaged during the 2015 Earthquake, Bhimsen Temple’s reconstruction is being overseen by the Bhimsen Mandir Reconstruction Committee. The project is being funded by public donations, government funding, and with technical support from Kathmandu Valley Preservation Trust. Like the Bal Gopaleshwor Temple, the Bhaidegah Temple in Patan was built incorrectly rebuilt in the dome style after the 1934 Earthquake. The error had been realized, and reconstruction in its original grandeur had just begun when the 2015 Earthquake struck. Reconstruction is underway, and is funded by the Royal Norwegian Embassy. The iconic 16th century Vatsala Temple, directly opposite to the splendid 55-windowed palace was reduced to rubble. The temple was made of sandstone and displayed magnificent carvings. The Taleju bell facing remained intact. As of April, 2020, reconstruction work of the temple is ongoing, and is coordinated by Shree Vatsala Durga Temple Reconstruction Consumer Committee-2017. Outside, a board proudly displays a donor list. Built in 1702 A.D, Nyatapola Temple is an architectural marvel. The top two floors were damaged during the earthquake, and restoration work of the same began in 2020. Reconstruction work is being overseen by Nyatapola Temple Preservation Work Consumer Committee-2019. The Shilu Mahadev Temple in Bhaktapur Durbar Square was completely damaged due the 2015 Earthquake. Reconstruction work was initiated in June, 2016 and was scheduled to be over by July, 2018, however is yet to be completed.