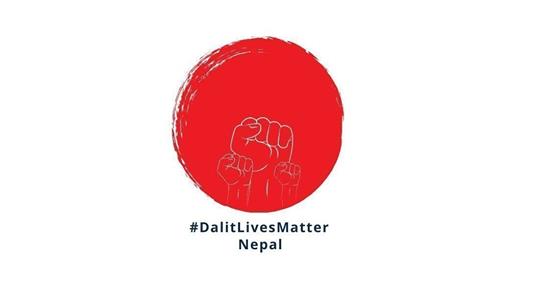 #DalitLivesMatter Artwork by an online platform raising awareness on rights of the marginalised people. (Image: Change.Org)

An opinion by Subesh Panta upon the recent incident in Jajarkot which resulted in the death of five Dalit Youth.

Is it a tradition that was embarked upon to maintain superiority among caste identities, and continues to perpetuate? Or is it an unfair institutionalized social practice of suppressing individuals in relation to their caste? Or is it a failure of politico-cultural and societal unity amongst ethnic diversity?

In Nepal, notably, the minority castes of the society are discriminated against because of a caste system which deems them ‘impure’. The ‘collective impurity’ notion, which has been ingrained within the nerves of the dominant caste, has been perpetuated since ancient times. The system of division of societal working groups according to their professions in various sectors. Even though the working hierarchy was based on performance, the self-made superior group manipulated the statement and the traditional practice of identifying social group castes in relation to their work which is now regarded as a biased caste-based society.

Consequently, this unethical system has thus prejudiced and placed lifelong scars on the so-called lower-caste group, giving a bold statement – “being descendant from the lower caste, you must follow your ancestor’s footprint”.

As a result, the political, social and economic life of scheduled castes is affected owing to the prejudiced belief inherited within society. Not only that, minorities in many instances are deprived of access to essential services such as education, health, and other social benefits. An unfavourable environment which inhibits individual and societal growth is created, and therefore pushing the communities to a vicious cycle of depravity.

Recalling the recent incident that took place in Jajarkot, Nepal, one may suggest the societal suppression from hierarchal class to preserve the ancient tradition.

Similarly, in Nepal, significant forms of cultural and societal discrimination are institutional in character. Those institutions carry certain principles, regulations, as well as the phenomenon of standard operation which willingly or unwillingly segregate marginal castes from the majority. Besides, cultural elements of legitimizing stereotype categorizing system, which is societal in character designed by certain professional groups manipulates every single aspect of those who do not belong to them.

Formation of culture-based or caste-based institution regulates the ways of discriminatory factors regardless of the attitudes and personal beliefs of an individual. Revisiting the recent incident that took place in western part of Nepal might be one of the significant consequences upheld by the ‘culturized’ caste based institutional system. To be specific, the fundamental belief is not a sudden upsurge in the thought of an individual. The origin of decriminalized suspicion possessed the layers of invisible superstition in the cyclic sphere of culture, tradition and institution, thus introducing the hegemony of shadowed society.

Primitively hegemonic society has again revived the historical long-haul plethoras of discrimination amongst the minorities, especially against Dalits. The re-establishment of an inclusive multi-party democracy with the CPN-Maoist, who fought continuously for ten years to end the different forms of social, cultural and political discrimination existing within Nepalese society, has failed. Their assurances to uplift the socio-politico-cultural status of ethnically marginalized people seem to have perished in thin air, as is evident by the Jajarkot incident. The assurance encompassed the protection of Dalits from any sorts of iniquity as mentioned on Article 40 of the 2015 constitution.

Once the slogan “Let’s fight caste-based discrimination and untouchability together” cherished hopes of suppressed class in availing equal rights. The moment to cherish did not even last for a generation following the latest incident t in the far-western region of Nepal.

The incident raises the layers of a question mark on traditionally based socio-cultural practices, constitutional article and its implementing institutions in acquiring the dream of an inclusive society by safeguarding the fundamental rights of socially displaced communities.

About the Author:
Subesh Panta is an international student from Nepal in Australia, and has recently completed his Masters of Social Work from Federation University, Ballarat.
The views expressed in the article are of the author, and do not reflect the editorial stance of Nepalese Voice.