FNJ To Hold Its Election On April 7 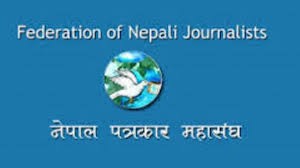 The Federation of Nepali Journalists (FNJ) is holding election on April 7.

A meeting of the FNJ central committee has decided to hold the election of the district, province, centre, media house and associate bodies after three weeks on the same day, FNJ secretary Prakash Thapa told RSS.

The FNJ has organised its central general assembly on February 16 and 17 as per its amended constitution.

It stated that the election schedule of all levels would be published on March 20. With the declaration of the date for the election, the Election Committee formed under the coordination of journalist Kapil Kafle will start carrying out its works from today itself.

Advocate Arun Poudel, Kapil Chandra Pokharel, Krishna Maya Bhusal, Harendra Rai and Devendra Jha are the members of the Committee while Bhaktiram Ghimire is the member-secretary.