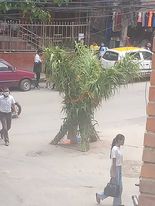 The Newar community across the country is celebrating Gathamangal, also known as Ghantakarna, today.

Believed to be the oldest one among other festivals of the Newar community, it is observed by erecting the dummies of a three-legged demon named Ghantakarna at streets crossroads on every Saun Krishna Chaturdashi (the fourth day of the waxing moon in the Nepali month of Shrawan as per the lunar calendar).

According to cultural expert Tejeshwor Babu Gwanga, the dummies made up of either wheat straw or bamboos or branches of plants are burnt down at night either in the farmland or river or rivulet at night depending on the beliefs in different places and traditions within the community.

By doing so, it is believed that the crops do not get infected by insects or pests. Worshippers bathe early in the morning, indulge in ritual worship and prayers, and clean houses and courtyards. The effigies of the demon are dragged and burnt down at night in a symbol of rejoicing the killing of the man-eater demon.

According to Gopal’s genealogy, Gathamangal is regarded as the symbol of Bhairava, the fierce form of Lord Shiva. It is customary that the newlyweds pay obeisance to Gathamangal. (RSS)