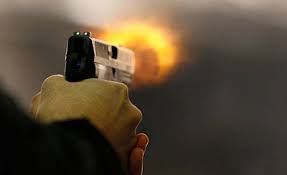 Police and drug smugglers have exchanged fire on the banks of the Mohana River at Moriyaghat, Bhajani Municipality–3, Kailali.

A special team led by Deputy Superintendent of Police Prem Bahadur Shahi was deployed to intercept the smugglers after the police received a secret information that they were smuggling three grams of brown sugar.

According to Inspector Hikmat Thapa, spokesperson for the District Police Office, Kailali, the smugglers fired one round at the police as the latter tried taking former under control near Nepal-India border pillar numbered 707/3.

“After that, the police retaliated,” Thapa said. “We fired three rounds from our side.”

There were no injuries on the police side. However, there are unconfirmed reports that one smuggler was shot.

The police have informed that the smugglers, numbering four or five, fled to India, taking the injured person with them.

The shootout took place at around 5.30 pm on Monday.

Tikapur and Bhajani in Kailali have emerged as transit points for drug smuggling from India to Kanchanpur in recent days.

A few weeks ago, an Indian drug smuggler was killed in a police operation in Kanchanpur.