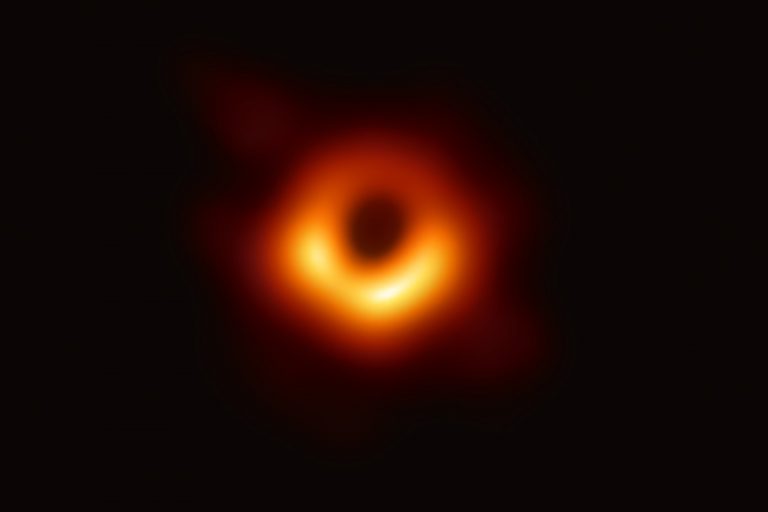 A black hole and its shadow have been captured in an image for the first time. The announcement of the first image ever taken of a black hole has been taken as a break through. It was made possible by an international network of radio telescopes called the Event Horizon Telescope (EHT).

“A black hole is an extremely dense object from which no light can escape. Anything that comes within a black hole’s “event horizon,” its point of no return, will be consumed, never to re-emerge, because of the black hole’s unimaginably strong gravity. By its very nature, a black hole cannot be seen, but the hot disk of material that encircles it shines bright. Against a bright backdrop, such as this disk, a black hole appears to cast a shadow”, states NASA.

The new image shows the shadow of the super massive black hole in the centre of Messier 87, an elliptical galaxy some 55 million light-years from Earth. This black hole is 6.5 billion times the mass of the Sun.

According to NASA, catching its shadow involved eight ground-based radio telescopes around the globe, operating together as if they were one telescope the size of our entire planet.

Using the EHT, scientists obtained an image of the black hole at the centre of galaxy M87, outlined by emission from hot gas swirling around it under the influence of strong gravity near its event horizon.

Elizabeth Landau from NASA states, “ Neilsen and colleagues who were part of the coordinated observations will be working on dissecting the entire spectrum of light coming from the M87 black hole, all the way from low-energy radio waves to high-energy gamma rays. With so much data from EHT and other telescopes, scientists may have years of discoveries ahead.”