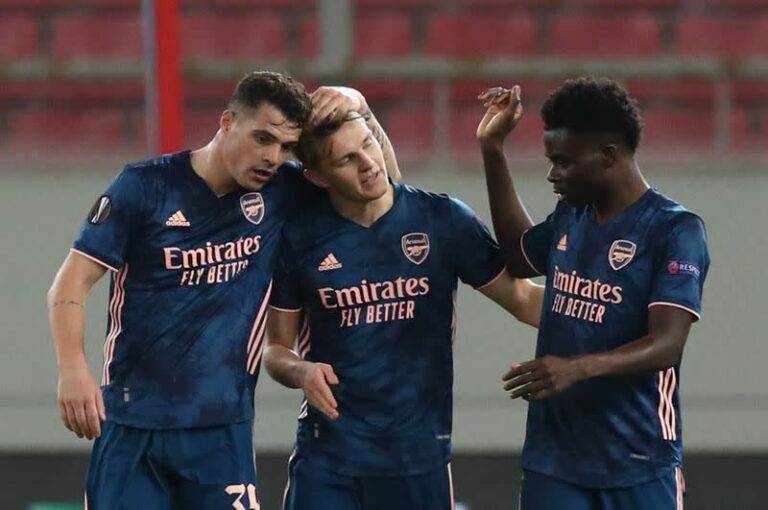 Kjaer’s goal after teenager Amad Diallo had given United the lead leaves the clash of the heavyweights in the balance ahead of the second leg in the San Siro next week.

Ajax Amsterdam put one foot in the quarter-finals with a 3-0 win over Swiss side Young Boys — the goals all coming after the hour mark from Davy Klaassen, Dusan Tadic and Brian Brobbey.

Arsenal are in a strong position thanks to a 3-1 win at Olympiakos in which with Martin Odegaard scored his first goal for the club and Gabriel and Mohamed Elneny struck late on.

The English side were knocked out last year by Olympiakos but now look set to progress, as do their north London rivals Tottenham Hotspur who had a Harry Kane brace to thank for a 2-0 home win over Croatian side Dinamo Zagreb.

Manchester United and Milan have clashed 10 times down the years in Europe, winning five apiece, but it was the first time they had locked horns since United claimed a 7-2 aggregate victory in the Champions League last 16 in 2010.

STIFFER OPPOSITION
Milan lost 4-0 at Old Trafford on that occasion but this time they provided far stiffer opposition. United were fortunate to go in level at the break as Milan’s Rafael Leao had a fifth-minute effort ruled out for offside and the visitors had a Franck Kessie strike ruled out for a questionable handball call by VAR.

The 18-year-old Diallo, who joined United from Serie A club Atalanta in January, came on as a halftime substitute and claimed his first goal for the English side five minutes later.
Picked out by a lofted ball from Bruno Fernandes he found the net with a smart back-header over Milan keeper Gianluigi Donnarumma.

Dan James missed a sitter for United when he turned a cross by Mason Greenwood wide but Milan got the reward they deserved in stoppage time when Kjaer headed Rade Krunic’s corner past Dean Henderson.

It was the first goal United had conceded in 503 minutes in all competitions and means they will have their work cut out in next week’s second leg. “We’re very disappointed to concede with one of the last kicks of the game,” United manager Ole Gunnar Solskjaer said.

“That makes it harder of course, but it was always going to be down to the second game there anyway.” Newly crowned Scottish champions Rangers fought back to earn a 1-1 draw at Slavia Prague.

Romanian Nicolae Stanciu fired the Czech side ahead in the sixth minute with a superb strike but Steven Gerrard’s side drew level through Filip Helander. In the night’s other tie, AS Roma enjoyed a 3-0 home win over Shakhtar Donetsk with goals from Lorenzo Pellegrini, Stephan El Shaarawy and Gianluca Mancini.