115 feared dead after worst Mediterranean shipwreck of the year 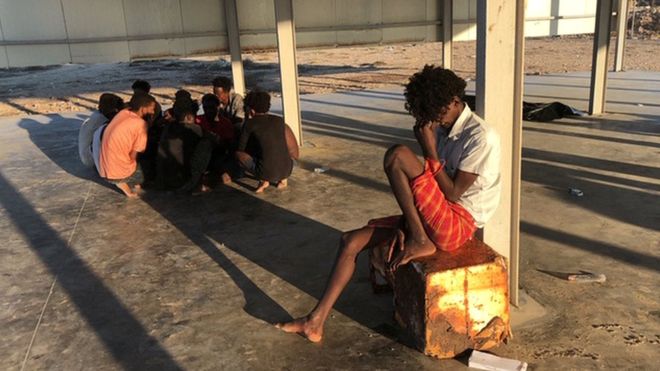 Migrants are seen rescued by Libyan coast guard after their wooden boat capsized off the coast of Komas, a town east of the capital Tripoli, Libya, July 25, 2019. REUTERS/Ismail Zetouni

About 115 people are missing and feared to have drowned and another 134 were rescued by Libyan coast guards and local fishermen after a wooden boat carrying migrants capsized off Libya, a Libyan navy official said on Thursday.

Earlier, the U.N. refugee agency UNHCR said that up to 150 people were feared dead.

“The worst Mediterranean tragedy of this year has just occurred,” UNHCR head Filippo Grandi said in a tweet.

There were about 250 people on board, mainly from Eritrea and other sub-Saharan Africa and Arab countries, when the boat capsized off the coast near Komas, east of the capital Tripoli, Libyan navy spokesman Ayoub Qassem said.

Libya is a hub for migrants and refugees, many of whom try to reach Europe in unseaworthy boats.

The latest shipwreck takes the death toll of Mediterranean migrants to over 600 this year, putting 2019 on track to be the sixth year in a row with more than 1,000 deaths, UNHCR spokesman Charlie Yaxley said.

“Until we address the reasons why people take these dangerous boat journeys, sadly, this is unlikely to be the last tragedy like this that we see,” he said.

Yaxley said survivors of the wreck were likely to be brought to two detention centers in Libya where they would face further risks, and he called for their immediate release.

“We know that inside these detention centers there’s insufficient food, water, often unsanitary conditions, there have been widespread reports of human rights violations taking place,” he said.

Libya says the migrants are illegally entering and leaving the country. It regularly detains them in centers that the U.N. says are effectively jails, exposing them to the added risk of being caught up in the country’s civil war.

One detention center in Tripoli was hit by an air strike earlier this month, killing more than 50 people. UNHCR subsequently said it had been closed, but rescued migrants have continued to be sent there.

Human rights activists have accused politicians in the European Union of turning a blind eye and letting people die rather than risk a voter backlash by appearing soft on immigration. Europe struggled to cope with an influx of more than one million refugees and migrants in 2015.

Italy, many African migrants’ intended first destination, has taken a tough line since a populist government took office in 2018, and immediately sought to close the nation’s ports to rescued migrants.