Udayo Hawa Le is a popular Nepali song, and the new cover has added a wonderful twist to the new song – it features Nepali lyrics, Nepali artists, and an Australian backdrop – making it a wonderful composition.

The cover video has been conceptualised, shot, and directed by Jeewan Rashaili, a prominent filmmaker/videographer within Melbourne’s South Asian community.

The song, originally sung by Hercules Basnet and Nikita Thapa, has been covered by Sujan Gurung and Jyoti Tiwari. Their melodious voices add a refreshing touch to a popular song in Nepal. Models Rahul Gajmer and Swostika Lamicchane are seen modeling for the song within various scenic locations of Melbourne – making it perfectly relatable for the Nepali Diaspora in Australia.

About MNTV Hall of Fame:

“Nepalis have a deep connection with music, and also have extraordinary talent”, Mr. Rashaili said while speaking to Nepalese Voice. “Through Hall of Fame we are looking to provide media exposure and a platform to those artists with musical aspirations”, he added. 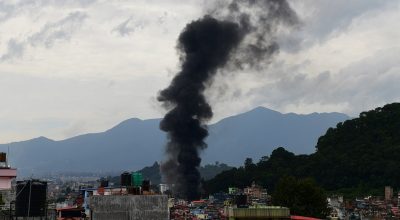 Fire breaks out at shoe factory in Balaju

Fire has broken out at a shoe factory in local Balaju. The incident occurred at